We are in a wonderful district

The most significant monument is the church of Santa Croce with a beautiful marble font located in the heart of the square. Inside the basilica there are the tombs of esteemed artists such as Nicolò Machiavelli, Vittorio Alfieri, Michelangelo and the tomb of Galileo Galilei. The Santa Croce square is large and rectangular in shape and each year in June it is home to “calcio storico” (Florentine football). This is perhaps the most important event in Florence, where the “calcianti” (football players) of the 4 neighborhoods challenge each other to medieval football matches. They are represented by the colors of their neighborhood. Red is for Santa Maria Novella, green is for San Giovanni, blue is for Santa Croce and white represents Santo Spirito. The most significant match was held on February 17, 1530, when the Florentine Republic challenged Emperor Carlo V, who at the time occupied the city.

Santa Croce is a prestigious symbol of Florence and is the meeting place of the greatest artists, theologians, religious leaders, writers, and humanist ideaologists who were, in good times and bad, the identity of the late-medieval and Renaissance city.

Next to the church is the marble monument of Dante Alighieri created by Enrico Pazzi in 1865. On the opposite side there is a fountain restored by Giuseppe Manetti in 1816 and a baroque fountain by Pietro Maria Bardi of 1673.

Crossing the river going south, we find the Forte Belvedere on a hill overlooking the Piazzale Michelangelo.

Although the area is very popular with tourists, it has maintained its original atmosphere. Walking through the streets and small squares you will discover small shops, non-touristy stores and smaller museums with much to offer.

They are: the Horne Museum, the Museum of the History of Science and Casa Buonarroti. The Horne Museum hosts a small but significant collection of paintings and sculptures collected by the art critic Herbert P. Horne, who lived here in Florence. The second is a kind of temple dedicated to Galileo Galilei that exhibits, among other things, its telescopes and the lens he used to discover the largest satellites of Jupiter.

Located at Via Ghibellina # 70 is the home of Michelangelo Buonarroti where he lived for a short time. You are welcome to visit it in the morning to take a look at the collection of works of art that have been collected there.

The Santa Croce district is made up of beautiful, smaller streets where you can find specialty shops of “corniciai” (custom frame makers), “restauratori” (art restoration) and antique dealers, but also restaurants and trattorias with inviting menus and a Florentine atmosphere. We discuss these further in the blog section of this site.

Filistrucchi operating for 300 years, this theatrical makeup and wig shop is the oldest of its kind in Florence | Map 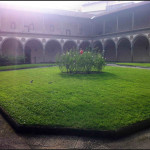 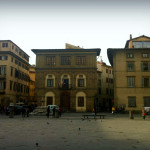 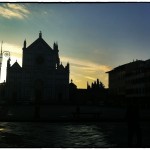 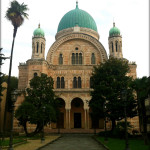 Sinagoga in via Farini

What are you looking for?